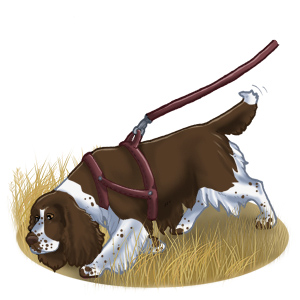 Tracking is a sport developed from a natural instinct of the dog: hunting. The dog's ancestor, the wolf, would hunt in packs, using their keen eyes to spot tracks in the ground, their ears to listen for the calls of the prey, and their sense of smell to pick up the scent of wounded game. All of this was passed down through the generations, but in some dogs these instincts became so degenerated that they were no longer a natural ability.

There are, however, some breeds that remain adept at tracking. For years, hounds have been used to track animals. Bloodhounds and Basset Hounds were commonly used by the police, Coonhounds and Beagles were used by hunters and kings, and in sandy deserts and dry grassland areas, sighthounds were used to track prey by sight. The sport of Tracking, though, is no longer limited to hounds. German Shepherds, Border Collies, and many other breeds have been taught to track like their ancestors, and have jobs with the police and at airport security areas.

Times have changed but the requirements for such a sport have not. A dog has to be smart, quick, and has to have a long attention span, for tracking can go on for days upon end in the wilderness. Dogs with these attributes determine who's who among the sniffers!