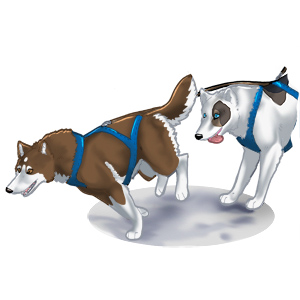 Sledding is a dog sport, but it hasn't always been. Sledding originated not as a sport, but as a way of life. The northern regions of the world adapted to the harsh climate by learning to get from place to place via dogsled.

What does it mean to be a sled dog? Well, for one, a dog has to be able to withstand the extremely cold weather of the far north for, at the very least, short periods of time. For the northerners, though, true sled dogs have been around before sledding was invented. Sled dogs originated from wild wolves, who had learned to coexist close to humans by feeding off of waste at human campsites. They were later kept as protectors of food and in turn received a portion for themselves. A short time later, man discovered these dogs could be of even more use by transporting goods from place to place with the use of a flat bed of wood. The more of these creatures used in a team to pull, the more weight they could carry, and the more profit made. Humans then realized that certain varieties of these dogs had better qualities than others. Because of this, humans began to selectively breed for desired traits. These ancient selective breeding programs are where we get our 'pure northern breeds' of today.

Today, sledding is open to different breeds. Any dog that is strong enough to pull a sled over long distances can make a good sled dog, but speed is also a factor in races such as the Iditarod. All kinds of breeds, ranging from the spitz-like breeds with their thick coats, to all kinds of hounds and even working dogs, such as Saint Bernards and Newfoundlands, or herding dogs, such as shepherds and collies, have excelled in this sport.