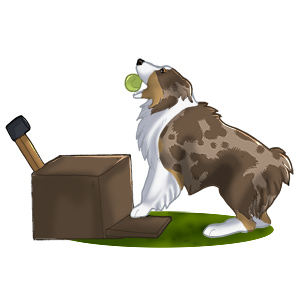 Flyball is a dog sport in which teams of dogs race over a line of four small jumps to a box which releases a tennis ball when the dog presses the spring. The dog has to catch the ball when it is fired into the air by the box. The dog then races back over the jumps to its handler while carrying the ball. The next handler then lets his or her dog go, and the process is repeated until every team member has completed the run. Flyball is effectively a relay sport.

Flyball is played by teams of four dogs and their handlers. The course is made up of four hurdles which are placed 3 meters away from each other, with the first hurdle 1.8 meters away from the starting line itself. At the other end, the last jump is 4.5 meters in front of the flyball box. The height of all four hurdles is decided by the shoulder height of the smallest dog of a team. The first team to cross the finish line without errors wins the “heat.” Penalties can be given if the dog drops the ball or the next dog is released before the one before has crossed the line.

Flyball is a very entertaining and fun sport and which anyone and any dog can play. Mixed breed dogs are allowed to compete and can do very well. Many champion teams have mixed breeds as members, although the track is currently dominated by herding breeds which have a high drive to work.

Flyball is considered a hobby to many people: a way to relax and enjoy themselves. Many champion and successful flyball dogs are pet dogs and not necessarily dedicated sporting dogs.