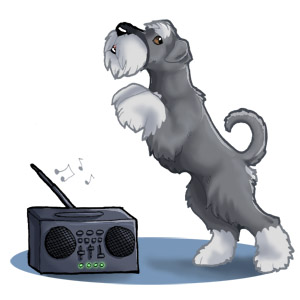 Musical Freestyle (sometimes called Canine Freestyle, Freestyle Dance, or just referred to as simply “dog dancing”) is a fairly new sport. Although it has been done for years as just a fun thing to do with your pet, it first became a sport around the 1990s in British Columbia, Canada. After the Musical Canine Sports International (the first Musical Freestyle club) was formed, it started to spread worldwide.

Musical Freestyle involves a team a handler and dog team that perform a dance to music. How could this “dog dancing” be considered a sport? Although it does not seem like a sport that requires athletics (like Schutzhund or Agility), Musical Freestyle requires a different and challenging set of skills. In particular, it requires a strong bond between man and dog. A dancing routine requires creativity with the owner as well as obedience on the dog’s part, and, as in most competitions, training aids and leashes aren’t allowed. There isn’t much difference between Musical Freestyle and regular dancing, except for the obvious fact that you’re dancing with a dog. Routines include tricks done with the owner and there are no limits as to what can be done. Whether your dog is weaving through your legs, shaking hands, or jumping, the possibilities are endless, and bounded only by your creativity. However, no matter what is used, it should be choreographed with music, or the judges will deduct points. As mentioned, Musical Freestyle requires a great amount of obedience to create a perfect routine. Timing is critical as well as precision and concentration, because the dog needs to look for cues in either the song or in “invisible” signals given by the owner. Looking good always helps too, and several handlers wear matching costumes with their doggy partners.

There are no restrictions as to what breeds can compete. The popular breeds in this sport are small to medium sized breeds due to the variety of routines you can do with them and their light bodies (imagine picking up an English Mastiff at the end of your routine). Several other breeds used are Standard Poodles, Border Collies, Australian Shepherds, and, of course, mixed breeds.

All in all, the main objective in any Freestyle event is to have fun.