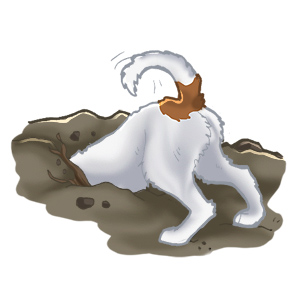 Earthdog Trials is a competition mainly involving terriers. In a trial, a long tunnel is dug underground and a scent trail is laid, to make the course simulate a real animal den. Typically a rat or a similar animal is placed at the end of the tunnel in a cage. The dog involved in the trial is placed at the entrance to the burrow, and is released on a signal. The dog then navigates the tunnel, following the scent trail underground and finding the animal. The dog then “flushes” the animal by barking at it to try to make it escape so that, in theory, the hunter can shoot it. This is called working the quarry. The quarry in this case is the animal.

In the Earthdog Trials, the dog does not come in contact with the animal. The dog must remain focused by barking at the quarry for a specified period of time before it is lifted out of the tunnel. The dog with the fastest time and the fewest penalties wins.