Marl Creek's history dates back to February 2004, with many of the lines today continuing from the same stock. I focus on competition instead of colours or genetics. Specializations are in various breeds, mostly of the hound group as well as others. The main specialties are listed here:

For a little about me, I've been on FP since 2004 with the same name, kennel, and mostly the same breeds. I owned the first pair of Dutch Smoushonden, had among the first 50 Taiwan Dogs, held several top positions for the FPBeta achievement boards, wrote a few of the sport descriptions, helped get Musical Freestyle and the Porcelaine as a new sport and new breed respectively, broke the inventory system to get a maximum inventory enforced, and my Silverwing Greyhounds are descend from the first dog I bred (Shade Silverwing). So ya, I've been around a lot. Please don't treat me as a newbie helper. There's not a lot of time in my day to help large numbers of people.

For non-FP related, I'm a Canadian recluse that works as a registered veterinary technician when I'm not playing video games and pumping unhealthy amounts of coffee into myself. My gaming preferences are kinda all over the place, but my favourites include Okami, Shadow of the Colossus, Ratchet and Clank, Pokemon, Dark Souls and Bloodborne. I'm pretty non-social and lurk the boards mostly, but I will answer questions or talk when approached (my time is the same as FP's, though my work shifts aren't consistent every day. Mostly active in the evening). I'm not artistic and I can't code to save my life, so there you go. Thanks for Crestie and others that make free layouts!

I currently have a young male blue Bedlington Terrier named Hermes (like the Greek god, not the fashion brand), born on the 35th anniversary of The Legend of Zelda, February 21, 2021. My male seal-point Ragdoll cat named Lance passed away October 2020 just two days shy of his 17th birthday.

Display some tags here or add some text! Delete this is you don't want it! This box seems small, but it will stretch as you add more tags! :D 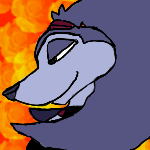 Layout Design and Coding by Crestie.
This is a freebie layout! Get the code for it here! for your kennel!