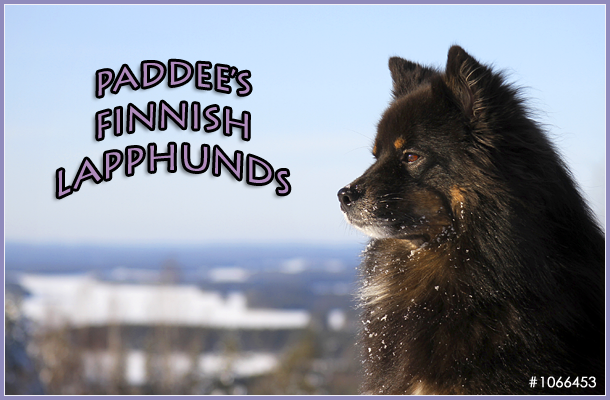 Welcome to Paddee's! This is a kennel specializing in producing Finnish Lapphunds that do well in sport and are nice to look at as well. All dogs are bred primarily for aptitude, but I keep several different sport lines.

I also always have tons of side projects going on. In these from-the-scratch projects the first few generations may be bred and circulated fast, but as the HH count goes up and aptitudes become satisfactorily fixed, the ultimate goal is to build up the XPM and the strongest possible aptitude. My most successful project so far is my Bluetick Coonhound line, the cream of the crop in the breed.

I often put my level 20+ males up for public breeding with affordable fees even for beginner players. I usually have to keep some of my dogs locked, but dogs that are currently listed for public stud will be unlocked upon receiving a breeding request - except for 100+ days old studs, which I will automatically unlock only when I clearly see that the breeding is going to be completed within the next 24 hours to avoid wasting valuable breeding days. I will lock the studs again the next day, usually around 4-6 pm game time, so please be prepared to do the breeding before that. Otherwise, or if I accept but forget to unlock for some reason (it happens), just send me a message! (Mind that I may sometimes be busy with life and let listings expire. When I'm not on an Elite account, I may not be unlocking unlisted studs at all. You can always ask first if you'd like to use one to know for sure.)

Beyond level requirements, I have only one limit for accepting breedings: the female must not have been bred for more than three times previously. Because the litter quality goes down with each breeding, I personally think four litters is more than enough for any female on Furry Paws, and I will reject all requests made for more. I also reserve the right to reject requests placed on my most valuable 100+ days old studs for females that are not of sufficient quality (bred more than once already or haven't got the stud's aptitude). Don't worry though - even if I reject one of your requests, that doesn't mean that I wouldn't accept your future requests if the female passes the quality check.

If you buy a puppy or a dog from me, it's yours to do with as you like. I won't keep tabs on whether you breed or retire early, sell it on or keep it locked forever.

Number of dogs to reach level 100 before the stats update: 7.

Copyright © 2003-2020 Mythic Multimedia, LLC. All rights reserved.
Use of this site signifies your acceptance and agreement to our Terms of Service.
[Credits] [Privacy Statement] [ModBox] [View Mobile Site]